Fast Fathers Get your
Free Consultation 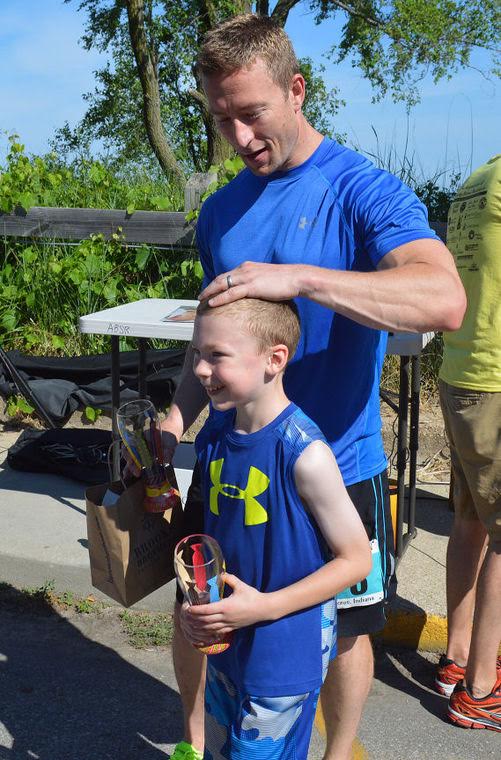 BEVERLY SHORES — With the Mother’s Day annual brunch last month, it was time to dig out the running shoes for the Father’s Day run celebration.

Donned in running shorts and neckties, runners from all over northwest Indiana and eight different states enjoyed a fast, and a little hilly course along Lake Michigan.

Race Director Curt Kendall, of Michigan City, led the speedy runners throughout the 3.1 miles on his bike, then welcomed runners – from age four to age 78 – into the finish line. The race was timed by THT timing, from Valparaiso.

“This has been the best weather ever,” Kendall said.

There were about 400 racers, Kendall said, a mix of familiar and new faces.

“I met a family from Indianapolis who has been to this race five years in a row,” he exclaimed. “People do this race over and over. There are a lot of locals.”

Kendall invited runners and walkers of all speeds and ages to race, inviting strollers and father daughter and -son teams to compete.

“We had a significantly higher amount of family teams and strollers,” he said laughing. “I have seen a lot of strollers.”

The race awards were given to the top three places in the age group, male and female, however, Kendall added a few more fun awards to the race. Recognition was given to the best and unique tie worn by a runner and the top father-daughter and father-son team were announced.

Several names were called for their fun ties, some featuring the wearer’s children’s faces on it, one was Christmas inspired and one man wore so many his 3.1 mile run felt a lot heavier and hotter than the others.

The tie outfits, which were the most unique, were worn by Amanda and Brooke Skalka from Westville.

With the Skalka men cheering them on, the team ran in a dress outfit fashioned from old ties.

“We have been doing this race for the last five years,” Amanda Skalka said, though it was her daughter’s first time.

The outfit was made by a friend of the family who is in college for design.

“She bought the ties from Goodwill and made them for us to wear!” Skalka added.

Winning the last four years together was the father-daughter team of Nicole, 31, and David Hartford, 55, of Chesterton.

The duo ran in 21 minutes and 59 seconds, she winning her age group and him placing second in his.

The father-son winners were Tyce and Brian Custy. Brian, 37, ran with his seven-year-old son to finish in a little more than 26 minutes.